Two Decades of Misery Erased – The Pirates are Back

It’s no secret that the Pittsburgh Pirates have been at the bottom of the National League barrel for more than twenty years. Not since the ‘We Are Family’ Pirates of the late ’70’s has the Pittsburgh baseball team been relevant on a national level. Despite opening a new stadium in recent years, fan interest had remained low and the wins were slow to come.

Of course, that has all started to change. Last season, the Pirates looked poised to finish over .500 for the first time in twenty years and possibly even qualify for the playoffs. That season ended in bitter disappointment as the team limped to the finish line and fell short of that magical 81 win total. 2013, however, has been different. The Pirates are going to finish well over .500, and they are going to qualify for the playoffs as well. The only drama remaining is whether the team will be able to pass the St. Louis Cardinals and win the National League Central title, or if they will have to settle for one of the two available Wild Card slots. The fans have returned, and things are looking up in the Steel City. 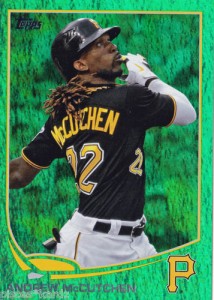 When thinking about collectibles and the Pirates, you can look to both current and former players as great pieces to invest in. For the modern-day Pirates, two players stand out above the rest in deserving your collectible attention – Andrew McCutchen and Gerrit Cole. McCutchen is certainly the face of these Pirates as a quick-to-smile center fielder with impressive power and speed to burn. McCutchen is a game-changer and seems like a sure bet to be an All-Star for another decade to come. Cole is a power right-hander who has made a splash in his first season in the bigs. Gerrit Cole rookie cards are likely to be a hot commodity as he heads toward becoming one of the best pitchers in the league.

As with all things collectible, looking to the past is a wise idea when selecting items to purchase. The current revival of the Pirates is a great opportunity to look at the last great Pirates teams for cards and other items to pick up and add to your collection. The two main features in the lineup of the 1979 World Championship team were Dave Parker and Willie Stargell. Cards from both of those legendary players are always a welcome addition to any collection, even for non-Pirates fans. On the mound, Bert Blyleven is the most notable name from that team and is also worthy of your time in tracking down collectibles.

Only time will tell what the 2013 Postseason has in store for the Pirates. Perhaps they will shock the baseball world and win their first title in 34 years – or maybe they will fall in the Wild Card game to the Reds. Either way, 2013 will be remembered as the year that Pittsburgh baseball got back on the map and made an impression on a national level. With rising starts like McCutchen and Cole, along with a great supporting cast, it seems that the Pirates are going to be a force for many years to come.