Posted on February 27th, 2013 by admin | Posted in Baseball Cards 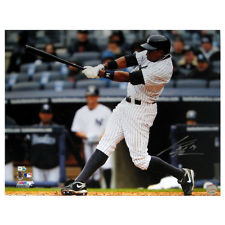 Growing up in a city south of Chicago, one might expect Curtis Granderson to have been a White Sox fan. However, he made a personal choice to follow the Atlanta Braves instead. The Cubs were never an option due to their interfering with him watching his favorite after school TV show, “Saved by the Bell’ when one of their games was broadcast on WGN preempting it.

Today, as a member of the New York Yankees he has travelled the world in the support of MLB. England, Italy, China and New Zealand are just a sampling of the trips he has made in support of Major League Baseball International. This worldwide recognition has contributed to the popularity of his memorabilia. His number 14 jersey is already being prominently displayed in Europe and Asia.

Curtis Granderson began his professional career as a center fielder with the Detroit Tigers. He was promoted to the big league squad for the third time in August of 2005. In September of that year he had an inside the park homer, a 5 hit game and then a walk off round tripper within a 12 day stretch. Curtis was in the majors to stay. He won the starting center field spot in spring training of 2006.

In his first full season with the Tigers they reached the World Series. He had 2 home runs in the 2006 AL Divisional Playoffs and added another during the AL Championship Series. Unfortunately Detroit came up short in the series itself, losing to the St. Louis Cardinals in 5 games.

In 2007, Granderson established himself as one of baseball’s premier all-around players. His defensive prowess had already been shown at the beginning of his pro career. He was error free in the field for the first 151 games he participated in. During the 2007 season his offensive abilities became apparent as well. His batting average was .302 and he hit 23 home runs. Along with the 23 homers were 23 triples and 38 doubles. He also stole 26 bases and was caught stealing only once. The combination of these assets officially showed him to be a 5 tool player. He could hit for average, hit for power, run the bases, throw and field. During the 2007 campaign he joined one of the games historic 5 tool players, Willie Mays, as one of only 2 other ball players at the time to hit at least 20 home runs, 20 triple, 20 doubles and steal 20 bases.