You really can’t be blamed if you have no paid much attention to the Miami Marlins over the last couple of seasons. They haven’t been particularly relevant or interesting, with the exception of power hitter Giancarlo Stanton. However, there is a new reason to watch the Marlins, and he is taking the National League by storm over the past year+. His name is Jose Fernandez, and you should expect to see a lot of him in coming seasons.

Just 21 years old, Fernandez hails from Cuba and is already one of the best strikeout pitchers in baseball. In only 185.1 innings in the major leagues, he has already K’d an impressive 204 batter, while walking only 60. 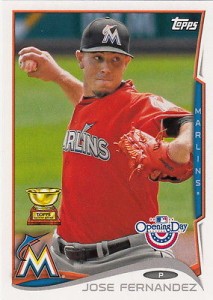 He started 28 games last season for Miami, recording a 2.19 ERA along with a 12-6 record. He won the Rookie of the Year award, was an All-Star, and finished third in the Cy Young voting. Not a bad start to a major league career.

Fernandez dominates games with classic stuff that you would expect from a big right-handed pitcher. His fastball is intimidating, and he has the control over his secondary pitches necessary to make batters respect them. He hasn’t been doing it with smoke and mirrors – this kid has all the tools to be one of the best pitchers in baseball for years to come.

When you start talking young Marlins players, the natural question is whether or not they will stay with the team long-term. Miami has made some big trades over the years, and seen some impressive players head off for new cities. However, Fernandez is young and under many years of team control, so it seems likely he will remain in South Florida for the foreseeable future. Also, the Marlins have expressed interest in keeping Stanton around for the long-term, giving them the possibility of having a star player on offense and in the pitching staff.

Picking up some Jose Fernandez collectibles soon would be a great idea for any collector. Rookie cards should be easy to find since he was just a rookie last season and, given good health, his stock seems to be headed nowhere but up. Beyond his ability on the field, he has already gained many fans with a quick smile and great story. If you have a collection of cards or other items that highlight some of the best power pitchers in history – names like Clemens, Ryan, Johnson, and more – you will want to make sure Fernandez is represented sooner rather than later. He hasn’t earned a place among the greats just yet, but his ability is of that caliber.

Things seem to be turning around for the Marlins, who just might have a better 2014 season than most would expect. They probably aren’t ready to contend for a playoff spot in a tough division with Atlanta and Washington, but the Marlins are starting to build around two of the best players in the game in Fernandez and Stanton. With that kind of a base in place, winning seasons may be just around the corner.