Justin Smoak – The Most Important Man in Baseball?

When you think about the most important players in baseball today, Justin Smoak is probably not a name that comes to mind. After all, he owns just a .704 career OPS in almost 500 games – not exactly the start to his career that most expected. Smoak was a highly-touted prospect in the Rangers organization who found his way to Seattle in a trade which included Cliff Lee. A few years later, Seattle is still waiting for the ability that Smoak possesses to match with his production on the field.

So why is he so important in the 2014 season? Smoak has been tabbed as the Mariners clean-up hitter – 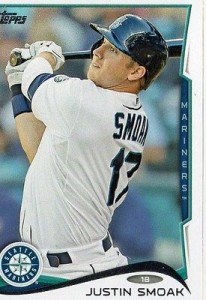 meaning he has the duty of hitting behind Robinson Cano. When Seattle invested nearly a quarter of a billion dollars into Cano this past off-season, many wondered who would be used to protect him in the lineup. Smoak has been charged with that job, and how successful he is will have a large say in what kind of season Seattle achieves.

Without a doubt, the tools are in place for Smoak to breakout, and there have actually already been some positive signs. During the 2013 season, he was an above-average performer from the left side of the plate, but poor numbers as a right-handed batter drug down his overall line. Also, he managed to hit a total of 20 homers last season, even with spending a little bit of time on the disabled list. If Smoak is able to come through for Seattle, it won’t be completely out of nowhere.

Rediscovering his stroke from the right side of the plate is what stands between Smoak and a productive career. He is naturally right-handed, yet that is the side which has plagued him over the last year+. The large expanse that is left field at Safeco Field surely has something to do with it, but he’s struggled on the road as well.

There is no doubt that Robinson Cano is going to see more than his fair share of intentional walks during the months to come. When the M’s have runners on 2nd or 3rd late in the game and Cano comes up, most teams will give him four and take their chances with Smoak. Cashing in on those chances is what will define the Mariners season.

In the early going, the signs have been positive for Seattle. In the first six games, Smoak already has two homers and eight RBI. Not only that, but he’s already make an opposing manager pay for the intentional walk strategy. The Angels chose to put Cano on and load the bases early in the second game of the season. Smoak, hitting right handed, stung a double into the gap and scored all three runners. With just a couple more successes like that one, teams will think twice before giving Cano the pass.

Most analysts don’t love Seattle’s chances this year, but they increase dramatically if Smoak comes into his own. The tools are there, and the early signs indicate that he is rather comfortable hitting behind Cano. If there Mariners are going to return to contention for the first time in a decade, it will have a lot to do with the production they get from their big first baseman.