Among the best starting pitchers in the National League, Jeff Samardzija is a right-hander who has had more than his share of headlines already this season. For one thing, he is a free agent after the 2015 season and it is 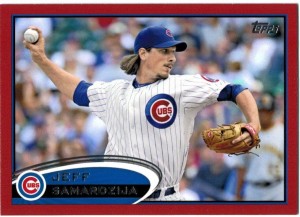 widely assumed that the Cubs will use him as the centerpiece of a trade package that can be used to try and rebuild their team. Samardzija is a powerful young pitcher who should have many successful years ahead of him – and that kind of promise usually returns an impressive package on the trade front.

There is only one thing wrong with Samardzija’s profile so far in 2014, and it has absolutely nothing to do with his ability – he is yet to be crediting with winning a game. Thanks to the Cubs paltry offense, Samardzija has no wins and four losses to his record, despite having the best ERA in all of the NL after ten starts. Fair? No – it is not his fault that his team is unable to score enough runs to provide him with a few wins along the way. He is doing his part and then some – but the rest of the team isn’t holding up their end of the bargain.

A reliever earlier in his career, Samardzija seems to be getting better with age. He already has 54 strikeouts through his first ten starts, and is getting deeper into the game than ever before. Any team lucky enough to land his services, should the Cubs decide to trade him, will be getting a starter than can be counted on for an excellent effort every five days. For the former Notre Dame wide receiver, the transition to baseball has gone about as well as could have been expected.

When will he get traded?

For most people, the question is when Jeff Samardzija will get traded, not if. The Cubs, of course, are not making their plans known, but a trade seems to make the most sense. The Cubs don’t appear ready to contend anytime soon, so using this valuable piece to get several young players is probably the wise way to try and jump start the franchise. For a team that feels they are only a pitcher away from a possible run to the title, investing some prospects in a trade to the Cubs for Samardzija might end up looking like a great option.

However, since he isn’t a free agent until after next season, there is no guarantee that Samardzija will be moved before the end of July trade deadline. The Cubs will be in the enviable position of getting to sit back and listen to offers for their talented pitcher. If none of the offers are suitable for their needs, the Cubs can simply let him pitch out the rest of the season and wait until this winter to reassess their options. Considering the condition of much of the Cubs roster at the moment, what they decide to do with Jeff Samardzija will likely say a lot about the near future of the team they are able to put on the field at Wrigley.