The Loss of a Legend Tony Gwynn

Tony Gwynn, one of the best hitter of all-time, recently passed away at the age of 54. Gwynn played 20 incredible seasons for the San Diego Padres, and became the face of that franchise – and in many ways, the city as a whole. In addition to starring for the Padres, Gwynn also played basketball for San Diego State University and still holds many school records in that sport, as well. Gwynn was as much respected for his personality and attitude as his baseball ability, and his passing has been hard on the baseball community as a whole.

Sometimes, baseball fans are too quick to pass around the word ‘great’ when referring to a specific player. In Gwynn’s case, however, it 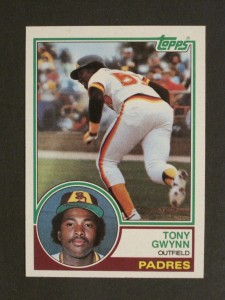 certainly applies. His hitting ability was part natural born talent, part hard work and dedication. He started hitting as soon as he reached the big leagues, and didn’t stop for two decades. He also was a quality defensive outfield and amassed plenty of stolen bases – but his bat is what will always be remembered, and what took him all the way to the Hall of Fame.

When you look over the statistics that represent Tony Gwynn’s Major League career, it is hard to decide which numbers stand out most. Of course, a .338 career batting average is hard to ignore. He had a .847 career OPS, which is incredible for someone that was known more for contact hitting than power ability. Also, he hit 135 homeruns and stole 319 bases for the Padres. By any measure, Tony Gwynn is among the best to ever pick up a bat.

Strikeout Totals Not to Be Believed

If there is one line on Tony Gwynn’s stat sheet that stands apart from the rest, it has to be his strikeout numbers. To a baseball fan who is familiar with ‘average’ numbers for hitters in terms of walks and strikeouts, they simply don’t seem like they could be correct. Over a 20 year Major League career, Tony Gwynn struck out a total of 434 times. That averages out to just 29 K’s per 162 games! In today’s game, it isn’t uncommon to see a player strike out 29 times in a single month. In 1995, while winning the batting title with a .368 average, Gwynn struck out a grand total of 15 times. He faced Greg Maddox more than 100 times in his career, and never struck out. The list could go on and on.

A Must for Collectors

If you are a baseball memorabilia collector and don’t have Tony Gwynn represented in your collection, now is the time to change that. This isn’t a financially-motivated move – but rather, one that will help your collection better represent modern baseball history. Gwynn is a legendary player, and a collection without him in it just wouldn’t be complete. Take the time to hunt down some great pieces of memorabilia related to ‘Mr. Padre’, and your overall collection will be better for it.