Posted on December 1st, 2013 by Matt | Posted in Baseballs, Players

In the age of social media, it seems that there are very few surprises left when it comes to the transactions of professional sports teams. Typically, there are days or weeks of speculation and rumors before a big deal comes together – if it ever does. That was not the case when the Detroit Tigers decided to send slugging first baseman Prince Fielder, and his large contract, south to Texas for second baseman Ian Kinsler. In fact, this trade came out of positively nowhere. It was a done deal before the first rumors even broke, and suddenly the landscape of the American League had changed pretty significantly. Who got the best of this swap?

Why the Tigers Moved Fielder

By looking a little deeper, it is pretty easy to understand why the Tigers would be interested in moving a player like Fielder. For one, they had a logjam at the ‘all-bat, no-defense’ positions. In 2013, they were using the combination of Fielder/Cabrera/Martinez to play first base, third base, and DH on a nightly basis. While all are excellent hitters, they are equally bad defensive players. Specifically, playing Cabrera at third was a minor-disaster that certainly hurt Detroit pitching throughout the season. With this trade, Martinez can remain as the regular DH and Cabrera can slide over to first base. When prospect Nick Castellanos is ready for the big leagues, third base will be wide open for his arrival.

All of that doesn’t mention the financial implications. Detroit had well over $100 million still committed to Fielder over the next several years. They are already on the hook for a huge Verlander contract, and faced the possibility of seeing Max Scherzer walk or have to trade him. Now, they may have the dollars to resign Scherzer and keep that deadly pitching staff intact.

Why the Rangers Moved Kinsler

Just like in Detroit, Texas was working on a logjam of their own. With Elvis Andrus and Ian Kinsler in the middle infield, prospect Jurickson Profar was without a position. After the trade, Fielder adds to the power of the Rangers by filling first base, and Profar can take over second base full time. The downside for the Rangers, of course, is they have to take on a long and expensive contract 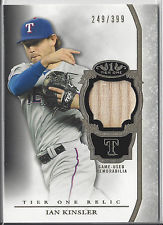 for a slugger who may be on the downward side of his career (although Detroit ate some of the salary). This trade makes sense on some level for both teams, but the Tigers seem to have gotten the ‘safer’ end of the trade.

For baseball card collectors, this adds a new team to the careers of both Fielder and Kinsler and new merchandise to go along with it. Fielder in a Tigers uniform may become more valuable down the line considering he only spent two seasons in the Motor City. Ian Kinsler was probably never a prime target for collectors to begin with, and this trade likely doesn’t change that fact. Rookie cards still hold the most sway in the collecting world, so Fielder with the Brewers and Kinsler in his early Texas days are probably going to remain the most valuable pieces for these two players.