The St. Louis Cardinals have a well-earned reputation as one of the best-run franchises in all of baseball. One look at their recent resume would suggest that they do, in fact, know what they are doing. A constant presence in the playoffs, the Cardinals seem well-positioned to remain as a force in the National League for many years to come.

The Los Angeles Angels of Anaheim, on the other hand, seem to be trending in the opposite direction. After a very successful first decade of the new century, the Angels have started throwing money at their problems – only to end up with more problems. The last two off seasons have seen the Angels making the biggest splash, first with Albert Pujols, and next with Josh Hamilton. Neither of those moves have paid off to this point, and the Angels appear to be going nowhere fast.

An Obvious Move for St. Loius

Given the fact that the Angels have a glut of outfielders and no third baseman to speak of, the Cardinals made sense as trade partners. The Cardinals have plenty of infielders to go around, but were a little thin in the outfield department – especially center. Peter Bourjos is one of the fastest players in baseball and a great defensive outfielder. In addition, he hits better, and for more power, than your average speedy outfielder. When he can stay healthy, Bourjos is an enviable player that forces the opponent into a lot of uncomfortable positions.

But Not for the Angels

While it is easy to see why the Cardinals would be interested in Bourjos, it is not so obvious why the Angels would be willing to deal him for David Freese. Although Freese will live in St. Louis history forever after his amazing 2011 World Series performance, his 2013 campaign left a lot to be desired. He posted career lows in just about every category, and flopped in a big way in October. He is only under contract for two more years, as opposed to three for Bourjos, and will be more expensive to boot. Sure, the Angels needed a third baseman, but way Freese? And 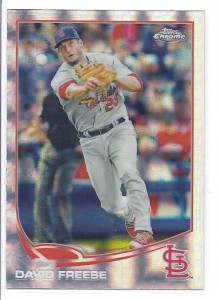 why give up Bourjos?

As it stands, this trade seems like an easy win for the Cardinals. They addressed a significant need without having to part with anything of too much value or pay high free agent prices. The only obviously trouble that could be lurking on St. Louis end is the injury trouble that seems to follow Bourjos. If he can stay on the field, he’s an asset – but that’s a big if. For Anaheim, the deal seems less than desirable. Sure, Freese could rebound and be a useful player for the next couple years, but there is a chance that his useful days are behind him. Typically, hitters numbers get worse when moving from the National to American league, and Freese certainly can’t afford to go down much from where he was in 2013. It will all play out in time, but St. Louis fans sure have to feel better about this deal as it looks today.